There have been few TV series that made as big an impact on viewers as the critically acclaimed Stranger Things, now into its second season in the UK. The series has been widely hailed as one of the best science-fiction TV series of recent times, and has also been praised for its inventive storylines and character portrayal, which means it’s no surprise the best stranger things gifts are flying off the shelves. A strong cast, including Winona Ryder, and a highly original premise that combines active homage to popular films of the 1980‘s with a dark and sometimes unsettling supernatural theme, Stranger Things is quite unlike any other such series.

The originators of Stranger Things fully accept they were highly inspired by the writing and screenplays of the likes of Stephen King, John Carpenter and Stephen Spielberg, and fans can spot deliberate homages to the films of these – and others – throughout the series. Part of the appeal is that the series revolves around a group of young friends, including a mysterious girl with certain unusual abilities. This lends it a charm and attraction that is not present in all such series, and also a touch of humour along the way.

This is a series that appeals across the board, and that takes the sci-fi genre into new territories. It’s watched equally avidly by adults and youngsters, and develops in many different ways throughout the season. Naturally, a series of such popularity inevitably leads to merchandise, and Stranger Things is no exception. So that’s why we decided to put together this review of the best gift ideas for the Stranger Things fans among your family and friends. There’s bound to be something here for everyone, so let’s get down to it and see what we can find!

Just for your enjoyment, because I love it, here’s the title sequence! 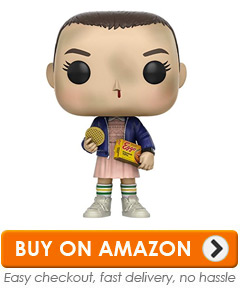 There are some recurring themes through the series – not least the character ‘Eleven’ having an obsession with a certain type of biscuit called Eggos, sold in the USA. Eleven is a central character in Stranger Things; she is a mysterious young girl who has psychokinetic ability, and who befriends the other central characters. She doesn’t say much, but has a strong influence on others, and eventually it is discovered that she has been party to laboratory experiments in her past.

This model, from the famous Funko Pop! brand, portrays Eleven with Eggos for maximum effect, and would make an excellent gift for a fan of the series. It’s not recommended for very young children, is well-made and a great stylised portrayal of the character, and would be welcomed by a collector. At around 9cm high it is a great model, and at less than £10 is certainly a worthy and affordable gift. 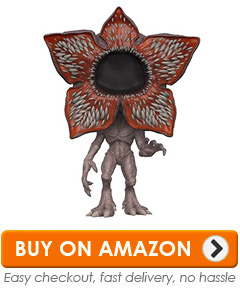 One of the themes involved in Stranger Things is that of parallel universes. From one of these – known as The Upside Down – yields a monster that finds a gateway across to the present universe, and that terrorises the town as a result. The character’s name the monster the ‘Demogorgon’, and this model is a great fun depiction of the monster from the Pop! range of vinyl figures. It’s well-made and very impressive, and would make an excellent addition to any collection.

The monster is a change from the usual characters so will look great wherever displayed, and one that – at the usual size of around 9cm – looks great. It’s nicely made, as are all Funko Pop! figures, and as you can buy it for around £9 is not expensive. This is, of course, dedicated merchandise, so if you are buying for someone other than a Stranger Things fan, is not for you! 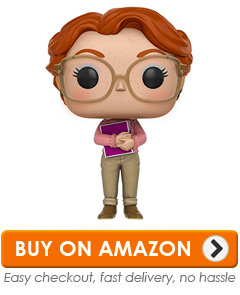 Stranger Things may have its roots in sci-fi and horror genres, but it also has many different strands to explore that are relevant to younger people growing up. For example, the way it looks at relationships and friendships is very fresh and real, and this shines through in the friendship between ‘Barb’ – depicted in this model – and her best friend Nancy, one of the central characters. This is another model from the Pop! range, and is of the usual style and quality.

Barb (Barbara) is one of the more grounded of the characters, and her concern is that her friendship with Nancy will be damaged thanks to the latter’s relationship with her boyfriend. This theme runs through the series. At 9cm tall, and not recommended for small children, this is a great addition to any collection of Stranger Things characters, and at around £10 is not expensive. 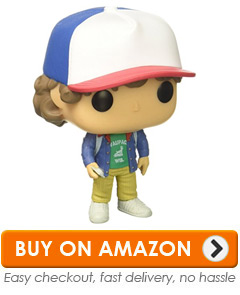 One notable aspect of Stranger Things that ranks it as a more intelligent series than your average drama is that it is not afraid to confront real problems that ordinary people face, including disability. Although it is no hindrance in his life, Dustin – portrayed here in this excellent figure – speaks with a pronounced lisp. This model is very neat and of the usual quality you would expect from the brand.

Dustin is modelled holding his compass – which he often has with him during the series – and as he is one of the pivotal characters this one would fit perfectly into a collection of Stranger Things models. Again, it’s about 9cm high and in the usual style and quality, and not recommended for small children, but at around a tenner it would make a great gift for the collector. 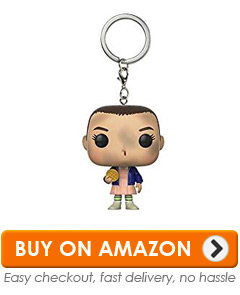 Now something a little different: it’s a keychain model of Eleven with her trademark Eggos; she is the mysterious young girl who has psychokinetic ability, and who befriends the other central characters. She doesn’t say much, but has a strong influence on others, and eventually it is discovered that she has been party to laboratory experiments in her past.

This key chain, from the famous Funko Pop! brand, portrays Eleven with Eggos for maximum effect, and would make an excellent gift for a fan of the series. It’s not recommended for very young children, is well-made and a great stylised portrayal of the character, and would be welcomed by a collector. It’s a great fun and usable gift, and at less than £5 is certainly a worthy and affordable gift. 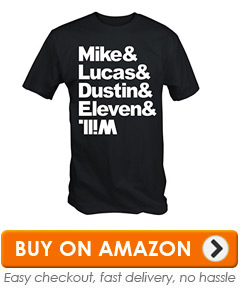 It’s no surprise that when it comes to merchandise for TV shows, t-shirts are among the most popular, so if model figures are not your thing this excellent shirt may be of interest. Made from 100% cotton and in a regular fit, it comes in black with the four main character’s names on the front, and it is a very cool item indeed. It’s a typical round-neck shirt in quality materials, and would be a welcome gift for any fan.

You can get it in a full range of sizes and it is fully washable, and it would look great on a night out or for casual wear around and about. There is great demand for these, as there is for all such merchandise, so you are advised to get in quick if you want one. At under £10 it’s certainly good value for a quality t-shirt, and the current popularity of the show means it will be very much an ‘in trend’ item. 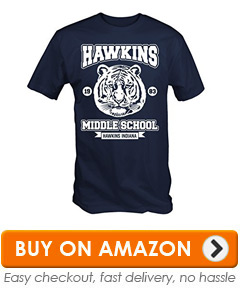 Stranger Things is set in the fictional town of Hawkins, Indiana, in the 1980’s, a fact reinforced by not only its references to films from that decade, but also an excellent soundtrack. This t-shirt is very popular with fans of the series, as it depicts the logo of Hawkins Middle School, which the main characters attend. It’s a quality cotton t-shirt that is well made, and the print is washable too.

You can get it in a range of sizes that should cover most wearers, and is a classic round-neck design that would look great with a pair of jeans. For serious fans of the show, this would make an excellent gift and one that will also be a talking point, and at much less than a tenner is a great gift idea that will be very much appreciated. 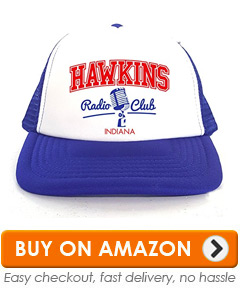 The Hawkins Radio Club plays a central part in the unfolding storylines on Stranger Things. The three boys who are the central characters are all members of the club, which is allied to the school, and they are allowed to use the powerful equipment to solve the mysteries that come around throughout the series. The club is, therefore, very much part of the Stranger Things mythology, so this cap is an excellent gift for any fan.

It’s a typical high-quality cap of the traditional design, with the radio club logo on the front, and it is fully adjustable so will suit just about anyone comfortably. It’s fully padded and is designed to reflect 80’s style caps, so is in trend with the show. All in all, an excellent gift for the Stranger Things geek, and at around £8 it’s far from expensive.

For many fans of the show, it is Eleven who makes Stranger Things the powerful show it turns out to be. She brings a sense of unease and mystery to proceedings, and is very much central to the many threads that wind together during the series. Without Eleven, who we later discover is not as she seems, the show would have gone nowhere, which is why she is a favourite among fans.

This great jumper is a cotton and polyester mix for durability, comes in a full variety of sizes and is great for both men or women, and it features a superbly rendered design with ‘Eleven’ as the central statement. It also comes in a range of no fewer than nine colours, and is great quality. This is an excellent gift for a Stranger Things fan, and at around £15 is not expensive for an item of this quality.

We finish our review with something that is a little different; it’s a t-shirt, and it references Stranger Things, but not directly. In fact, it says Stranger Kicks and features a joke-like drawing of one of the main characters with the Monster. It is great fun and would be enjoyed not only by fans, but those who don’t like the show but have a sense of humour. In short, it’s well done and very amusing – and also will be extremely popular.

It’s a traditional t-shirt with a round collar and finished in black with full colour print, and it comes in a full range of sizes so there will be one to fit. It’s 100% cotton and fully machine washable, and is made to a regular fit. As we said, great fun and a great gift, and at under £10 is not expensive.

There’s your list of the top ten Stranger Things gifts, so all that remains now is to wrap things up!

Let’s Wrap It Up!

Which gift idea should you choose for your Stranger Things fan? Well, to be fair, all of the above have their merits, but we think the models will appeal to only a certain type of collector. We can’t fault the quality of the clothing, either, so it’s really up to you! Meanwhile, why not watch it again, and see if that makes your mind up!